Home General Activist Investors in Europe: Who Will they Target next?
General

Activist Investors in Europe: Who Will they Target next?

The Covid-19 pandemic has reconfigured the landscape for investor activism across Europe. Companies have seen their operations hugely disrupted and their markets transformed almost overnight. For many, the financial impact has been significant, and for some the issues are existential.

In the face of this systemic shock, corporate performance has varied markedly, creating an attractive hunting ground for activists by highlighting winners and exposing weaker companies that offer activists an identifiable route to increased shareholder value. Generally speaking, activists do not target weak companies but prefer “good” companies that have a foundation on which to build to make them “great”. The pandemic has created a new cohort of these potential targets.

Investor activism slowed in 2020 as the lack of robust financial visibility and absence of broader institutional support combined to reduce the number of identifiable targets. However, this is only a temporary respite. As operational and financial clarity steadily reappears, so activist forces are returning, with a “crunch time” approaching for underperforming companies.

As well as the challenges caused by the pandemic, management teams are also facing calls for improved Environmental, Social and Governance (“ESG”) practices. These demands are born from a focus on what is good for the planet and its population, and also what is good for financial performance given that high ESG ratings are associated with lower costs of capital and higher shareholder returns. Activists increasingly use ESG related arguments as elements within their overall campaign, and this will bring additional challenges to companies and their Boards.

In order to predict which corporates are at greatest risk of being publicly targeted by activists, A&M has developed the A&M Activist Alert (AAA). As the most comprehensive regression model of its kind, the AAA is based on analysing the relative performance of listed companies across 44 quantitative and qualitative variables. These variables can be broadly grouped into the categories of Country, Sector, ESG, Profitability; Assets & Liabilities; and Equity Value & Structure. The AAA is fully refreshed every six months, building in the latest performance, outlook and known activist activity for corporates in the U.K., Germany, France, Scandinavia, Switzerland, Benelux, Italy and Spain.

The AAA identifies corporates that are at a higher risk of being publicly targeted by activists. Those corporates considered to be at risk of being targeted in the short term (i.e. within the next six to 12 months) feature on our Red List. Those considered medium-term risks (i.e. the next 12 to 18 months) feature on our Amber List. In the last three years, the AAA has predicted activist activity with a 55–60% success rate.

The most recent full refresh of the AAA was based on corporate results up to 30 September 2020, with our associated report released in December 2020. The next full refresh will be completed in May 2021, but in the meantime we have undertaken an interim analysis using data available up to 28th February 2021. For this interim analysis, our research team analysed 211 situations in which activist investors had made public requests to company boards since 1 January 2018. We then compared those 211 publicly targeted companies with 1,422 corporates which had not experienced such activist campaigns. 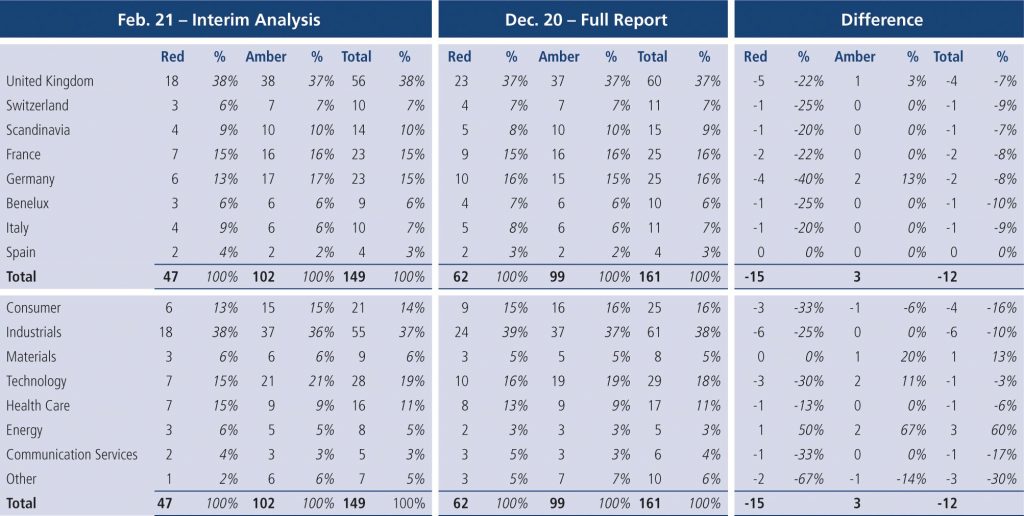 This latest analysis has identified 149 predicted target corporates. We have also unearthed emerging themes that provide greater insight into the predicted direction of shareholder activism as Europe adapts to the “new normal” post-Covid-19.

(Please note that in the data we publish, we do not disclose the names of the companies we identify as being “at-risk”, although the country and sector trends are included. We are happy to disclose and discuss the AAA analysis for individual companies, should they reach out to us.)

4. AAA Red and Amber Lists: Who are the activists‘ next targets?

Our interim analysis has identified 149 corporates considered to be at significant risk of public shareholder activism. This is down from 161 identified in December 2020 although 19 of those 161 companies have since been publicly targeted. A detailed breakdown of these at-risk corporates by sector and country is provided below, together with the previous results from December 2020 as a comparison (Fig. 1).

It is notable that the overall decrease of 12 corporates identified as being at-risk is driven very heavily by a reduction of 15 on the Red List. The companies on the Amber List have actually grown from 99 to 102. This changed weighting towards medium-term risk reflects continued challenges when it comes to obtaining full visibility on financials and operational performance. The wave of ensuing activism has not been avoided but rather pushed a little down the road.

From a country perspective, the U.K. is again predicted to see the largest number of targeted corporates with 56 now predicted to be at risk. This accounts for 38% of all at-risk companies.

A key driver of this continued predicted focus on the U.K. is that U.K. corporates have been worse hit by the crisis than many of their European counterparts, and therefore more opportunities exist to drive increased shareholder value. Generally activist-friendly regulations and governance, combined with relatively low average P/E ratios, also make the U.K. more attractive for activists.

The share prices of corporates listed in Germany have performed relatively well during the pandemic: at time of writing the Dax index has risen 9.6% since 1 January 2020 compared to falls of 1.3% in the CAC 40 and 11.3% in the FTSE 100. Share price growth has been driven by less severe impacts on operational and financial performance at the corporate level than the European average. The average earnings per share (EPS) over the trailing 12 months for the 237 German corporates analysed was 20.6% lower than the previous 12 months. This compares favourably to the European average, which showed a 25.4% decline.

However, higher share prices and lower EPS inevitably create high, and in reality unsustainable, P/E ratios. The German corporates analysed had an average P/E ratio of 35.4, compared to an average of 28.2 for all corporates in our analysis.

Higher P/E ratios mean German corporates are currently less attractive to activists, hence the reduced number on our Red List. This is also clear in practice, with German corporates comprising a steadily declining proportion of all European activist targets over the past two years.

Consumer-focused companies are predicted to continue to fall out of favour, representing 21 predicted targets, down from 25 in December 2020. The Covid-19 disruption to areas such as hospitality, physical retail and travel has left much of the sector too deeply damaged to be of immediate interest to activist investors. We do, however, see continued risk for companies focused on household and personal branded products.

In contrast, we predict more activist campaigns will target industrial, technology and healthcare companies. There were 55 at-risk industrial companies identified in the latest interim analysis, accounting for 38% of all at-risk companies.

We also predict that activists will increasingly turn their focus to the technology sector, with 28 companies now predicted to be at risk. The pandemic has increased the gap between the strongest and weakest performers, offering opportunities for activist intervention.

Healthcare companies are also expected to attract activist attention, with 16 predicted targets. Although sentiment towards the sector has generally been positive during the pandemic, companies that have let their underlying profitability slip cannot expect to escape scrutiny during 2021.

7. How to predict and avoid activist campaigns: the playbook

The AAA is not only a valuable early warning system against public activist campaigns. It also provides insights into the underlying characteristics of companies at risk of activist intervention, and signposts challenges that at-risk companies need to address if the risk of activism is to be minimised.

Stage 1: How would an activist view your company?

Adopting a focused “outside-in” perspective, A&M assess how an activist would view the corporate, provide the company’s AAA score, predict the probability of public activist action, discuss the key variables driving the company’s score and benchmark these variables against sector peers. This can help pre-arm a board against private approaches from activists seeking non-public discussions.

Stage 2: How can your company get on the front foot to avoid the attack?

Create a robust operational restructuring or transformation programme to deliver measurable benefits in a timeframe that meets investors’ expectations. This may include identifying potential disposals and/or improving under-performing and non-core business units or assets.

Stage 3: How can your company sustainably keep ahead of activists?

We work with the board and management to properly execute the benefits set out in our transformation programme, and on time. Our unique restructuring heritage and experience ensures that the transformation is robust and sustainable.

In our experience, the appropriate transformation programme required is different for each business, but at the end of the day, prevention is better than cure.

Companies, investors and government entities around the world turn to Alvarez & Marsal (A&M) for leadership, action and results. Privately held since its founding in 1983, A&M is a leading global professional services firm that provides advisory, business performance improvement and turnaround management services. When conventional approaches are not enough to create transformation and drive change, clients seek our deep expertise and ability to deliver practical solutions to their unique problems.

Patrick Siebert is Managing Director with Alvarez & Marsal and Co-Leader of A&M Germany. Mr. Siebert brings 15 years of experience in restructuring and corporate transformation for both private and public companies across Europe, the U.S. and Asia. Read more
previous post

Notification Obligations for Foreign Investments in the German...